Citation counts measure the impact of an individual author by counting the number of times he/she has been cited in other works. This count of a particular author's work is one of the components used to evaluate scholarly output and the impact he or she is having upon a particular discipline. Although such counting sounds relatively straightforward, it is complicated by the fact that there is no single citation analysis source that covers all publications and their cited references.

There are a number of ways to measure this:

Citation analysis as a qualitative measurement should be used cautiously, for the following reasons:

The h-index, or Hirsch index, has traditionally been used to measure the number of significant papers an individual scholar has published, though it is also used to determine the numbers of significant articles published by individual scholarly journals. Rather than a measure of the average number of citations, which can be skewed by either a single highly-cited article and by very new articles which have not yet been cited, the h-index is an attempt to provide a measurement that avoids over-emphasizing outlier citations. The index is intended to improve upon simpler measures such as simple citation counts or number of publications. Be aware the index works properly only when comparing scholars working in the same field, as citation conventions differ widely between fields.

H-Index = number of papers (h) with a citation number ≥ h.

Example: a scientist with an H-Index of 23 has 23 papers cited at least 23 times.

Advantages of the H-Index:

Disadvantages of the H-Index:

Created by Google Scholar and used in Google's My Citations feature.

i10-Index = the number of publications with at least 10 citations.

This very simple measure is only used by Google Scholar, and is another way to help gauge the productivity of a scholar.

Calculate your own h-index and other author indexes - It is a free software program that can be download onto a computer. It designed to help researchers manipulate Google Scholar citations to create their databases of citations from which they can generate their own metrics. 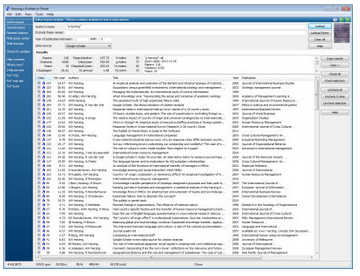