Journal Citation Reports is an excellent source for determining journal impact factor. It provides impact factors (over the two years citation period) and rankings for approximately 12,000 scholarly and technical journals and conference proceedings in the areas of science, technology, and the social sciences.

The Journal Impact Factor is a ratio devised as a measurement of the average citedness (and, by extension, importance) of a journal. It is calculated by dividing the number of citations of a particular publication in a certain year by the number of citable articles published in the journal in the previous two years. Other related measurements may also be calculated, such as the Five-year impact factor (which looks at the previous 5 years) and the Immediacy index (which is the average number of times an article is cited in the year it is published).

Like author impact measurements, journal impact measures can be only so informative, and researchers in a discipline will have the best sense of the top journals in their fields.

Limitations of the Journal Impact Factor:

Experts stress there are limitations in using the journal impact factor to evaluate a scholar's work. There are many reasons cited for not relying on this measure alone to evaluate the output of a particular individual, including:

According to Jim Testa, a researcher for ThomsonReuters Scientific, the most widespread misuse of the Impact Factor is to evaluate the work of an individual author (instead of a journal). "To say that because a researcher is publishing in a certain journal, he or she is more influential or deserves more credit is not necessarily true. There are many other variables to consider." (interview 6/26/2008 in Thomson Reuters blog entry)

What is the Eigenfactor score?

The Eigenfactor score reflects importance or prestige of a scientific journal. Created to help capture the value of publication output vs. journal quality (i.e. the value of a single publication in a major journal vs. many publications in minor journals). It considers not only the number of times in the last five years articles from a journal have been cited during the JCR year, but also the source of those citations. Citations from highly rated (i.e. impactful) journals make a larger contribution to a journal's Eigenfactor score than citations from lesser journals.

What is the Normalized Eigenfactor score?

What is the Article Influence Score? 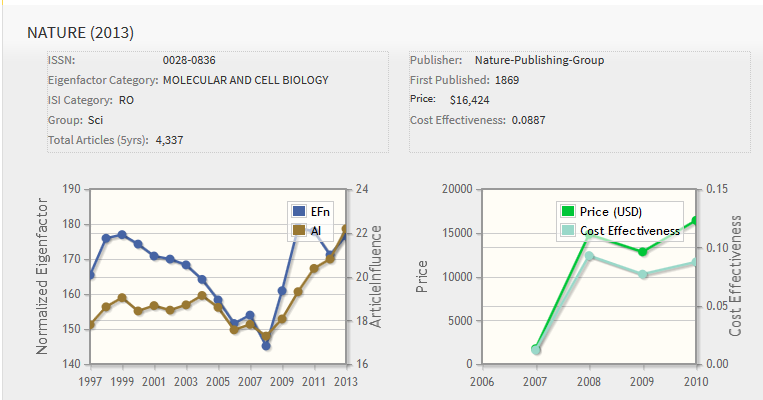 Other Citation Based Metrics

Subscription to/Circulation of a Journal

This metric indicates the size of the audience for a particular journal. Generally speaking, the greater the circulation the greater the importance. This information is sometimes made available on the publisher's website, or it may be obtained by contacting the journal's editor. For a quick figure, check WorldCat.

The Acceptance Rate of a Journal

Journals with lower article acceptance rates are more selective and, therefore, regarded as more prestigious. Being published in one of these journals tends to be viewed very positively during the tenure review process. Cabell's is a great place to find this information. Another place you might find acceptance rate is in the 'Information for Authors' section of the journal's website. If all else fails you can contact the Editor of a journal to see if he/she will share its acceptance rate with you.

Is the Journal Peer Reviewed?

Being peer reviewed is a commonly accepted indicator of rigor and credibility. Ulrich's Periodicals Directory will let you know whether a journal is peer reviewed.

Where is the Journal Indexed?

Prominent journals tend to be indexed in a variety of disciplinary-specific and general databases. Ulrich's will provide a list of the databases in which a journal's contents can be found.